Scan to Download ios&Android APP
Halving events are likely to boost the price
Other factors shaping a BTC price prediction
Is bitcoin a good inflation hedge?
What price will bitcoin reach in 2030?
Analyst views on BTC forecast for 2030
Bitcoin long-term forecast: Overtaking fiat money?
FAQs
By Iliana Mavrou
Edited by Jekaterina Drozdovica
10:41, 31 March 2022
Share this article
Have a confidential tip for our reporters?
Get In Touch
Over a decade ago, anonymous creator Satoshi Nakamoto mined the first-ever bitcoin (BTC) block known as the genesis block, kickstarting the cryptocurrency boom that still dominates financial markets today.
As the first cryptocurrency to ever be created, Bitcoin is almost synonymous with digital currencies and is the biggest by market capitalisation (as of 31 March 2022). In 2021 alone, BTC’s value surged by 54.64% from $29,374.15 on 1 January to $46,306.45 on 31 December, managing to surpass the $60,000 mark twice.
Its narrative managed to move far beyond being “a purely peer-to-peer version of electronic cash” to becoming a store of value and being compared to gold as a hedge against inflation.
Although bitcoin’s success is undisputed,  questions surrounding the cryptocurrency’s future continue to arise: Will bitcoin go up long-term and what are the bitcoin price projections for the decades ahead?
Bitcoin mining relies on a blockchain that connects all public transactions together. Using a Proof-of-Work (PoW) consensus, BTC miners compete against one another to solve mathematical equations and confirm the legitimacy of transactions. They are rewarded with BTC tokens, thus further encouraging participation in this crypto-mining ‘game’.
Bitcoin has a maximum supply of 21 million tokens. As of 31 March 2022, 18.9 million BTC are in circulation.
In order to reduce the rate at which new BTCs are given out to users, the cryptocurrency was designed to undergo halving events roughly every four years that would reduce the number of bitcoin tokens released into circulation by half limiting their supply and making the token scarcer, thus raising its value.
Research conducted by Capital.com showed that the value of BTC enjoyed a bull market lasting between 12 and 15 months after a halving event occurred. The past three halving events that took place in 2012, 2016 and 2020 saw the BTC price surge by 9,915%, 2,949% and 665% respectively.
While halving events tend to create buzz and excitement in crypto circles, they do not necessarily mean that bitcoin’s future price will rally.
“From a historical perspective, every next halving pushes the BTC price surge a little lower, meaning that the effect of bitcoin halving may be winding down. That doesn’t mean that the halving won’t drive the price up, however, its impact is notably decreasing every four years,” Capital.com’s research team stated.
Bitcoin’s fifth and sixth halving events, which are set to take place in 2028 and 2032 respectively, and the halving cycle around them, could be another factor shaping the bitcoin forecast for 2030. 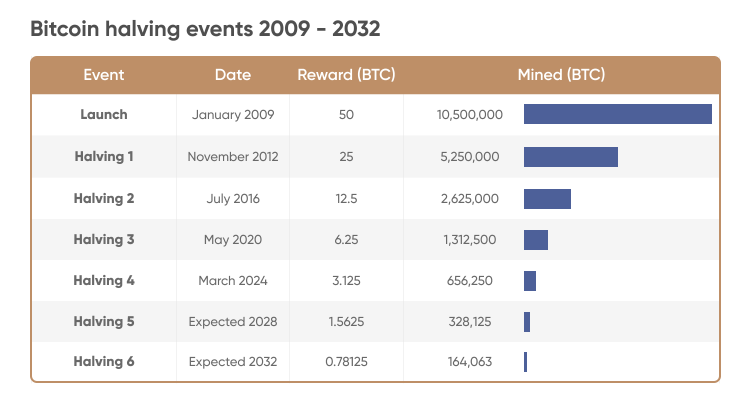 Joe Burnett, mining analyst at Blockware Solutions, believes bitcoin’s halving sessions will do good for its future price projections.
“Over the long run, bitcoin gets programmatically more scarce… The final 1,000,000 BTC [tokens] won’t all be mined until around 2140 – over 100 years away. This ever-increasing scarcity will be a large driver for the future price of bitcoin as market participants search for tools to preserve their wealth,” Burnett told Capital.com.
CoinLoan founder and CEO Alex Faliushin pointed out that the coin’s scarcity enabled but the halving events is what will drive the price higher in the future.
“We all know that there will be only a maximum of 21,000,000 BTC ever available, which makes it scarce – hence the price should go up in the long run, given that investors will believe in the technology,” Faliushin added.
In 2020 the global cryptocurrency market amounted to $1.49bn. According to Allied Market Research, by 2030 its value could grow to $4.94bn by 2030 – representing a 12.8% surge.
Meanwhile, research conducted by ResearchAndMarkets.com in December 2021 noted that the overall cryptocurrency market could rise to $2.73bn in 2025 from $1.63bn in 2021.
Allied Market Research stressed that bitcoin would remain as the highest gainer throughout the forecast period, noting that BTC was an “untapped potential on emerging economies” as it has already allowed many people, as well as firms, to develop and flourish. In addition, the token has been a great help to developing nations.
Positive developments in the 2021 BTC cryptocurrency market space included the adoption of BTC as a legal tender by El Salvador in early September and the launch of the Bitcoin futures exchange-traded fund (ETF) in October on the New York Stock Exchange (NYSE) that started to offer retail investors diversification, protection and liquidity, and a new way to get involved in the rapidly growing world of cryptocurrencies. 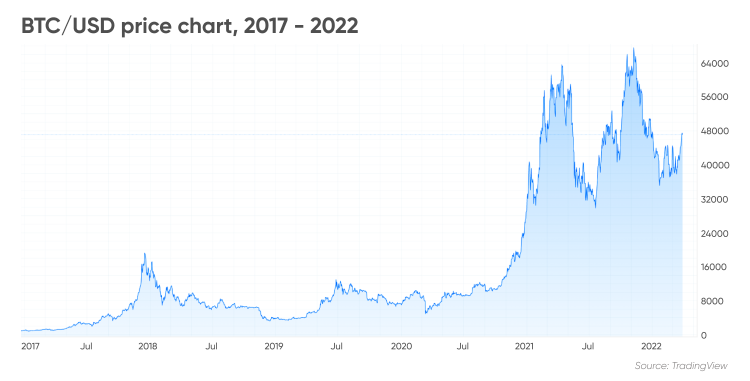